Round 6: Interview with Dave Hause from The Loved Ones. 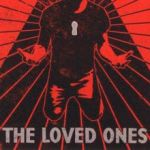 Sandra: „I first discovered Mr. Hause when he played with Chuck Ragan, Brian Fallon and Dan Andriano on the Revival Tour in Dublin in 2011.
He walked on stage, began to sing and totally stole the show. His voice and the utter silence while he was singing the first few songs caused goosebumps. You could tell that most of the crowd had not heard of him before the show, but Dave would make sure they would most certainly not forget him afterwards.
And when he was back in Ireland only a year later to support Social Distortion, the crowd knew every word to every song. This truly has been his year, and it couldn’t have happened to a nicer guy.

Dave Hause is a hardworking musician that plays honest punk rock with a passion. And also one of the friendliest and kindest guys I have ever met.
His lyrics are timeless and heartfelt and his solo record „Resolutions“ quickly became the soundtrack to my year.“

You have seen quite a lot this year. Can you name your highlights?

Sometimes you’re playing the song ‚Trusty Chords‘ from Hot Water Music. What makes it so special- why do you stop playing as soon as you see someone recording it?

We are here in Germany. So what are your favorite German words?